Can You Save a Life by Doing This One Simple Thing?

Toning Tables, Toning Beds | Lifetime Wellness Centers > Blog > Articles > Can You Save a Life by Doing This One Simple Thing? 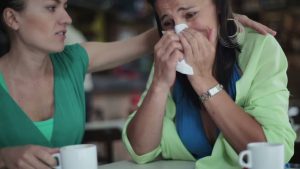 The Mental Health of your employees is something you need to be aware of before it becomes an obvious issue that results in conflict or self destruction. If you are listening, your employees mention problems they are having in their personal life. The immediate easiest solution is to blow them off by a flippant comment like, oh well, as you are walking away. You can rationalize not getting involved by telling yourself you are too busy with your own problems. The best solution is to ask a question or two and really listen to what they are saying.

No one can predict what moment becomes so overwhelming and hopeless that the person mentally snaps. That moment doesn’t have to be as big as getting a divorce or getting fired. A young mother, Darla, drown her daughter and slit her wrists resulting in a suicidal death after her washing machine broke.

Something as minor as a broken appliance hardly seems like a reason to kill your child and yourself. The back story paints a bigger, more explanatory picture of the events that lead up to the breaking point. The check Darla received from her job as a waitress bounced, resulting in bounced check fees for the checks she had written expecting her paycheck to be OK. Her boyfriend moved out. Without his help and financial support she would not be able to pay the rent due on the apartment. The dinner she had in the oven burned so badly it set off the fire alarm sprinklers in her apartment, spraying water all over everything in sight. The landlord was furious. Darla’s mother refused to help her because she had gotten in an argument with her stepfather. Feeling alone, with no money and no one to help her became too much for her. Who is to say whether just one less problem that occurred in this chain of events would have saved Darla from murder and suicide.

Whether it is an employee, relative, friend, or stranger you see in line at the grocery store, you have the opportunity to listen, to be aware, tune in, you do have an impact. It can be as innocent as making eye contact and smiling at the person behind you waiting in line. Any relationship with anyone will improve by just listening. You don’t have to give advice or pass judgement on what you hear. You don’t need a college degree. You don’t need to tell someone, “I know just how you feel”, as you proceed to refocus the conversation. It doesn’t matter that you aren’t in a position of power, money or position to change the person’s life circumstance. Listening is the most powerful support you can offer. Don’t underestimate your impact.

http://www.LifetimeWellnessCenters.com, Business Owner, B. A. Degree in Psychology